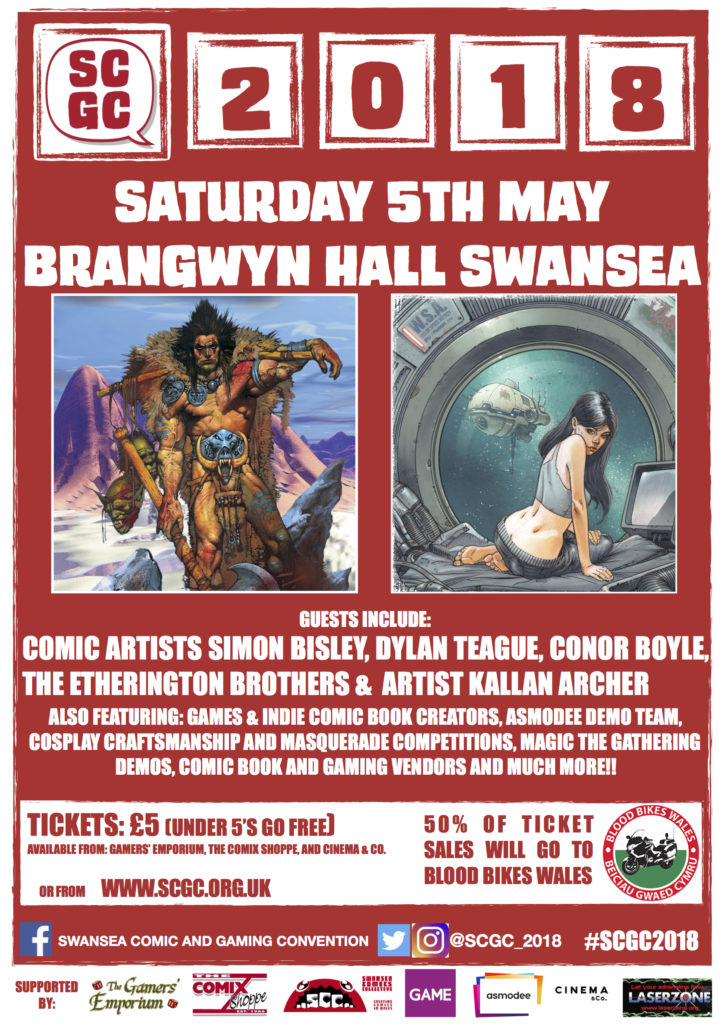 We’re on the home stretch. SCGC 2018 is just around the corner. Are you panicking yet? I’m not panicking! Stop panicking!

Let us recap all of the wonderful and interesting and wonderful things that’ll be on offer at this years show:

To kick things off, the evening before the event, we’ll be hosting a ‘Movie & Pizza Night’ at Cinema & Co. where you can hang out with us, eat pizza and watch The Transformers: The Movie (1986).

Then, on the day we will have 50+ guests, vendors and exhibitors; including big name artists, indie comic creators, illustrators, comics and collectibles vendors, cosplay guests, arts and crafts stalls, indie game creators, retro video game vendors and a selection of authors.

Waterstones will be making a welcome return!

Swansea’s own Gamers’ Emporium and Swansea Comics Collective will be there, rocking their stuff, too.

We also have a range of free activities for you;

We will be running two Cosplay Competitions. One being a craftsmanship competition where costumes will be marked by our team of judges Tasha from Sew Swansea, Iron Warrior Cosplays Dyfrig Griffiths, and Russell from Cosbont. There will also be our ever popular Cosplay Masqurade competition for those who just want to show off their costume and have a good time.

Various panels, covering a wide base of fandom, will be held throughout the day in our lovely new panel room. Come along, take a load off and listen in on the experts.

Various display teams will be on hand to show you the ropes when it comes to card, table-top and war gaming. One such display team will be Warlord Games which will be lead by none other than Andy Chambers! The learning will also come courtesy of Asmodee UK, Swansea University Role Play Society, and Swansea Wargames and Boardgames Club. Plus, a team of volunteers from Gamers’ Emporium will be running Magic: The Gathering demonstration games all day.

Tickets can be purchased from The Gamers’ Emporium, The Comix Shoppe, Or Cinema & Co. Swansea.

For today’s Exhibitor Spotlight we Spoke to Trev Burgess from Film 42 about their comic.

Myth of the K’inti is a new series of comic books describing a vast new realm of creation and alternate realities, which reawaken a group of youngsters’ imaginations. Check us out at https://www.film42.tv/ or find the books and posters at https://www.etsy.com/uk/shop/film42ComicShop

The comic has been a labour of love for myself, originally outlining the concept some 20 years ago.
Aimed at a younger audience (9+ to 99+), I hope to entertain an age group often left in the space between child and adult comics. In creating different realities, We have tried to create new visual styles with each new domain, the artwork evolving with each page turn.

Book one opens with a simple tale of a young group of friends meeting in their local café, overseen by Henry, the patriarchal owner. Part one introduces a strange young boy who fascinates and draws them in with tales of adventure and mystery. The newcomer creates an unsettling atmosphere with his stories and visions, highlighting the unease each teenager has with themselves, their friends and the adult world they have yet to acknowledge.

As part two quickly reveals, the protagonist, Timo, harbours ulterior motives. It is possible that the youngsters’ imaginations are being manipulated and used as a conduit for Timo, enabling him to reach alternate dimensions, through dream states created by his stories.

As we reach the climax of book one, new characters from other realities are revealed and relationships established. Timo leads the reader in another direction, pursuing his adversary and seeking answers. Throughout there are hints of a larger story arc, to be covered by five future books in the series.

I am the author of the series, as well as a Cinematographer & Director, with 35 years’ experience in TV and Dom Tsoi is the illustrator. Dom recently graduated from university, beginning a career as a hugely talented artist. We are both based in South Wales, UK. He can be found at https://www.domtsoi.com. Checkout his exhibition in March-April in Cardiff at https://www.thesho.co.uk/

We have grown as a creative partnership over the course of two comics and have begun to expand the characters and their world. We are both passionate about the style and quality of Timo, I believe we have created some great imagery and enough intrigue to encourage the reader to follow us in the series.
Funded totally by myself, I hope to promote the complete Book One (Parts 1 & 2) and gain a following to fund the other stories.

My intention has always just been to share my vision of a fascinating new world. It is my hope that it appeals to anyone, young and old, who loves to dream and who also never intends to grow up.

Our stand features Part one and two of the comic, but we also bring a selection of posters based on the book, limited edition T-shirts by the lovely lads at https://www.sickts.co.uk/ and if all goes well, some special jewellery from the series.

Swing by and say hi to me & Dom when you visit! 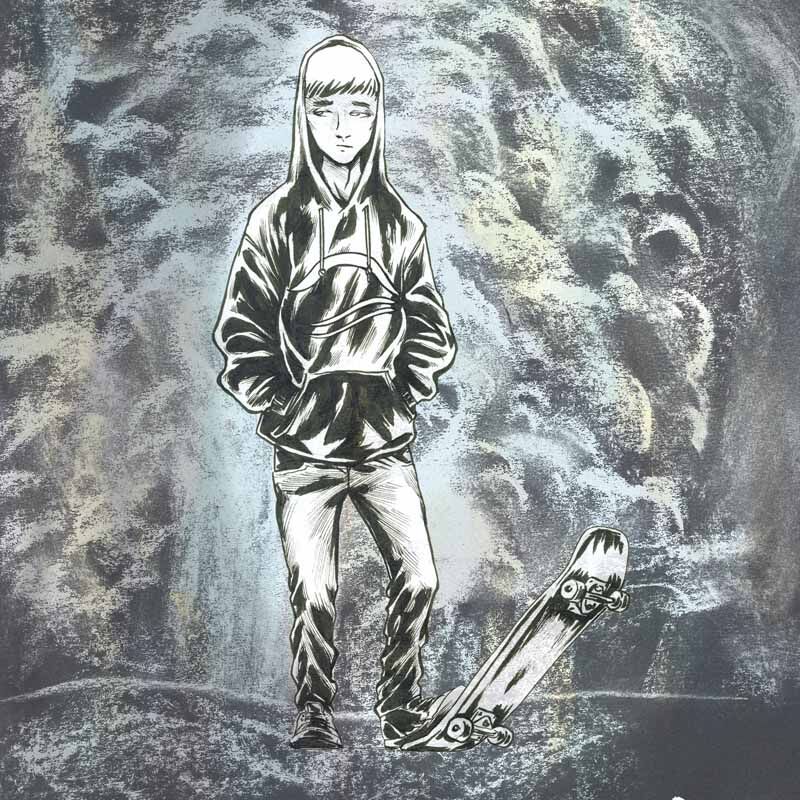 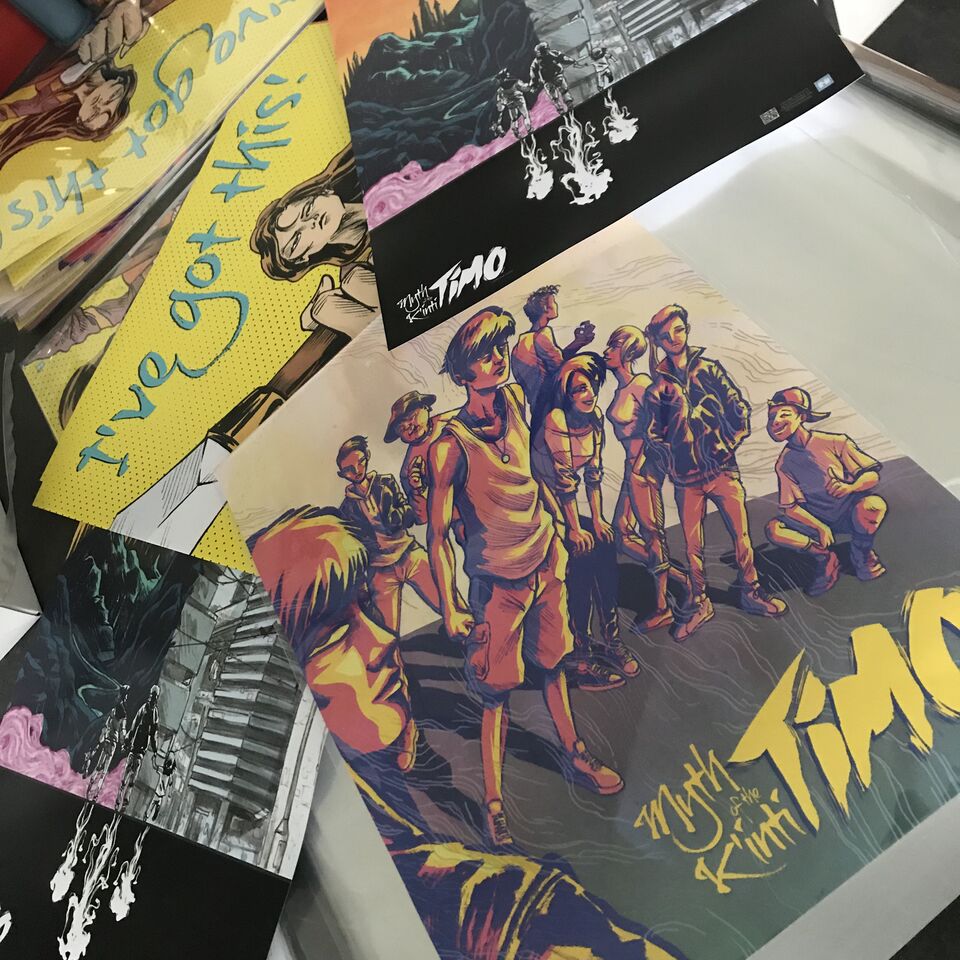